A few weeks ago I brought this lovely old North Shore Shoreline kayak. It needed a lot of TLC but was basicly sound. Unfortunatly it's to small for me. The front bulkhead has been set back so it could be used as a footrest. The lady I got it from was very petite, she had 6 inches of foam against the bulkhead. Even with this removed it's still about two inches to short. 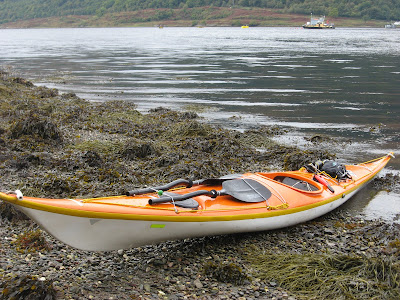 I thought about moving the bulkhead, but that is such a pig of a job, I've decided to sell it on. So far, I've taken off the old backdeck mounted pump and I'm replacing it with a new hatch. There's a third bulkhead behind the seat with a screw in hatch mounted on it. This digs in to your back when sat in the seat. I'll be taking this away and blanking the hole off. I've spent today sealing the skeg box which leaked a bit. When all the work is done I'll put it on the market, I'm thinking of asking £600 for it. 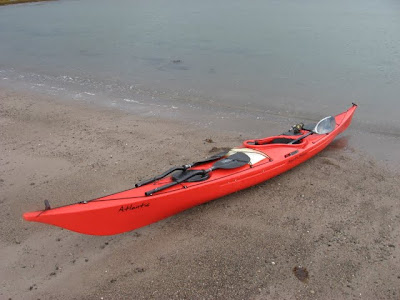 I'l be putting the money from the sale towards one of these, an Atlantic RM, again from North Shore. Plastic because a, I can't afford a new fibre glass one, and. b, Plastic takes the knocks better. A couple of weeks ago I tried to get my 4 star, I didn't get it, and the old Anas Acuta took quite a beating. I'll still be keeping the old Anas but the plastic one will be more of a workhorse.