Impressions of the Tarptent Notch.

I've been out in my new tent a couple of time now and am beginning to get used to it. The first time I went up to the Fords of Avon near to Cairngorm where I intended to spend the night. Unfortunately it was so windy I was having difficulty stand up never mind pitching a tent. So I ended up retreating to Bynack Stables or where it once stood. I managed to find some shelter amongst some moraine heaps. 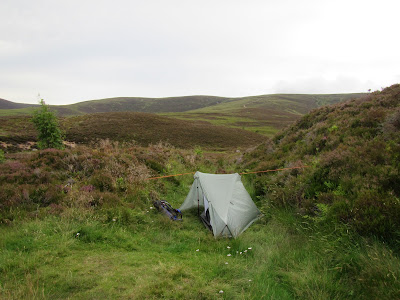 To pitch it, peg out the ends, open up the little triangles. Set your walking poles to the right height and slide them through the air vents and put the point into the ring in the fly sheet. Peg out the door and do the other side, it really is that quick and easy. To keep the ground sheet taught there's two small straps which go around the handles of your walking poles.
The ground sheet is about 2ft 6ins wide at the hips and tapers towards the head and foot ends so there's not a lot of room inside. Between the inner and outer at the hips is about 2ft either side which is more than enough stowage space for a rucksack and boots on one side and cooking on the other. The inner door zip is L-shaped and opens half of one side and on the other side is another L-shaped zip but at the other end. It's not possible to open up all of one side which I found awkward when trying to retrieve things from down by your feet. The ground sheet is made of silicon nylon which has quite a shiny finish, my mat is a short Thermarest Neo air which also has quite a shiny finish. The two together don't make for the most restful nights sleep. I'll have to think of a way to improve this. 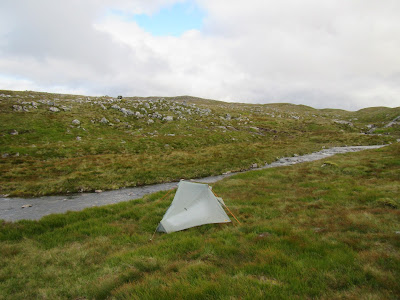 For the next try I climbed Braeriach from the end of the Glen Feshie road and camped by the out flow of Loch nan Cnapan on the way back. This time the weather was much milder but it must have rain in the night as the fly was wet when I woke. Inside I was happily dry. 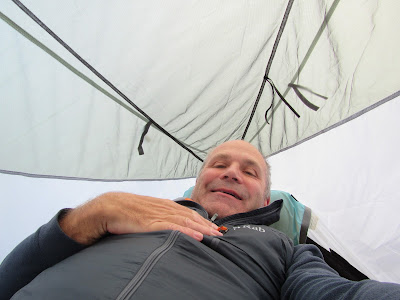 The standard inner is all mesh, I brought the half mesh half solid version  as I thought it would be a bit warmer in the windy Scottish hills, I'm not sure it is though. 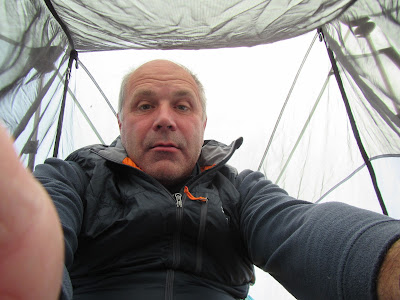